The P90 is a sub-machine gun found in Critical Strike Portable and Critical Ops.

However, there are some downsides with the weapon. The P90 has a very limited effective range, just like its peers, making it ill-suited to long-range combat, despite the high accuracy. The P90 is also the most expensive submachine gun, at $2200, however, this is still cheaper than a majority of the weapons available.

Overall, the P90 is a versatile submachine gun. Its 50 round magazine is easily the highest in the game, and the weapon also has decent accuracy and an extreme rate of fire, making it one of the most deadly weapons in Critical Ops in close-quarters. However, its range, being a submachine gun, is limited to a mid-far range, and it is the most expensive submachine gun on offer.

Submachine guns are generally used in mid-close range and the same should be applied to the P90, because of the fairly large increase of bullet spread upon continuous fire. With the largest amount of rounds per magazine in the game and with the high fire rate, the P90 can be deadly if used against several enemies. However, this should not be used to charge into a large group head-on. Sneaking from behind is also a viable option.

Use a weapon that is either powerful, all-ranged or both. The AK-47 is an excellent example of both qualities and can counter anyone using the P90 with its long range and high damage. Other weapons that can used as a viable counter include the M4, the URatio or the AUG. 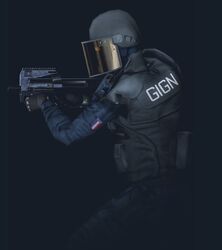 A Counter-Terrorist holding a P90.
Add a photo to this gallery
Retrieved from "https://criticalstrike.fandom.com/wiki/P90?oldid=6554"
Community content is available under CC-BY-SA unless otherwise noted.