The MR 96 is a revolver featured in Critical Ops.

The MR 96 is the magnum pistol of the game, dealing the highest damage per shot out of any other pistol and all of the SMGs. It also has high accuracy over long ranges, with a slight decrease in damage. This weapon penetrates armor with ease at close and medium ranges but suffers from a small drop in velocity at longer ranges. This weapon holds six rounds in the cylinder. However, the weaknesses of this weapon are its slow fire rate due to a stiff recoil, and its limited capacity, as well as a fairly slow reload time. This weapon is typically a two-shot kill at close ranges but can be three if the user's accuracy is poor or if firing over long ranges. However, a headshot is always a fatal one-shot kill. With high damage, accuracy, and penetration, the MR 96 is ideal for heavily protected enemies wearing Kevlar. However, it is balanced by having a slow fire rate.

Use this in long-range firefights, as the slow rate of fire will put you at a disadvantage. Note that a single headshot is fatal at long distances. It makes a good secondary to sniper rifles and assault rifles, as you can finish off players you injure with your primary weapon. Always remember that switching to your secondary is faster than reloading. Try not to get caught in close range firefights, as this weapon's slow rate of fire, limited capacity, and slow reload will more than likely get you badly injured or killed.

Take advantage of the slow fire rate by moving in patterns, such as strafing. Once the user has to reload, begin firing. Also, beware at longer ranges. Do not expose yourself until your enemy has fired six shots, or has used all of their rounds killing your teammates. At close ranges, listen for the click of the hammer falling on an empty chamber, then the sound of the user starting to reload. Use this opportunity to rush your opponent and eliminate them before they can reload. 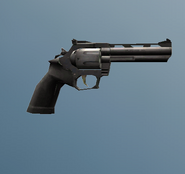 Model pre-patch 0.6.2.3
MR.jpg
Add a photo to this gallery
Retrieved from "https://criticalstrike.fandom.com/wiki/MR_96?oldid=6534"
Community content is available under CC-BY-SA unless otherwise noted.