The MP7 is a small sub machine gun featured in Critical Ops.

The MP7 is a medium power, fast firing sub-machine gun. This moderate damage output in close-quarters, combined with the extreme rate of fire, adds up to one of the fastest killing automatic weapons in the game in close-quarters combat. The MP7 also boasts good penetration, better than that of the MP5. The MP7 also has decent accuracy and recoil control, so mid-range attackers can easily be dealt with with sustained fire. Along with good movement speed, the MP7 is also a very cheap weapon, at only $1600.

There is only one severe downside of the weapon. Being an SMG, the MP7 is abysmal at mid-long range against more powerful and longer-ranged weapons, especially the AK-47, M4, and sniper rifles.

Overall, the MP7 is a very strong submachine gun since it boasts good damage, a high rate of fire, better penetration factors than the MP5, a cheap price, proficient accuracy and the movement speed is also favorable. However, it is held back by its limited effectiveness at longer distances. 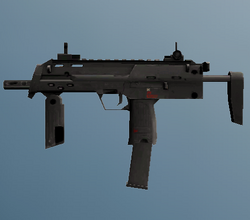 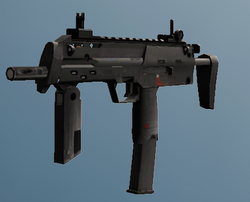 New model concept
Add a photo to this gallery
Retrieved from "https://criticalstrike.fandom.com/wiki/MP7?oldid=6709"
Community content is available under CC-BY-SA unless otherwise noted.