For its predecessor, see the M4A1 from Critical Strike Portable.

The M4 is an assault rifle found in Critical Ops.

The M4 is a medium-damage assault rifle, which has damage statistics on par with the AUG. With an excellent mid-far range, two shots to the head can take down a player wearing Kevlar & Helmet and thanks to the better recoil control than the AK-47, it is a favourite for many players. The M4 also boasts high accuracy, allowing for accurate, well-placed shots on foes.

However, its advantages comes with its cons. With inferior penetration compared to other weapons like the AK-47 and the AUG, its damage can vary quickly. The M4 also is outclassed at longer ranges by its peers with higher accuracy and better damage at a distance, like the HK417, SG 551, and AUG.

Overall, the M4 is a very common assault rifle, due to its competitiveness at close-mid range, and its good rate of fire can drop opponents incredibly quickly in mid-close range combat. Its high accuracy on the first few bullets allows the M4 to compete with the occasional distant target, while being outclassed at some qualities by other weapons.

Like the AK-47, burst-fire at medium or long ranges and spray at close ranges, although, because of its better accuracy, it can be sprayed for a bit longer than the AK-47. For quick kills, aim at the head, for it delivers less damage and penetration power than the AK-47.

A way to combat the M4 is to use sniper rifles at far distances, as their accuracy is perfectly maintained at long ranges and that the M4's will decrease the farther it goes, even with burst fire.

Other assault rifles can be used as well. A suitable choice would be the AK-47, with higher damage delivery and power.

The M4 during Pre-Alpha stages in Critical Ops. 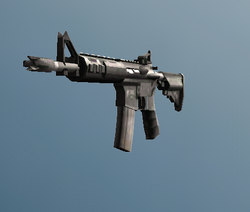 Old model of M4.
Add a photo to this gallery
Retrieved from "https://criticalstrike.fandom.com/wiki/M4?oldid=6555"
Community content is available under CC-BY-SA unless otherwise noted.