The GSR 1911 is a suppressed pistol featured in Critical Ops.

The weapon has overall decent and moderate statistics with a steady fire rate and medium damage and accuracy. The GSR 1911 also has great run speed which can be convenient for fast travel across maps. At a price of $600 in Defuse matches, this weapon is handy if short on money and can serve as a replacement for a primary weapon, due to its low cost and decent damage.

Firing at the head is the optimal choice, since it has only 8 rounds of ammunition which can be expended relatively quickly. Firing at the torso is also an option, but is usually less effective. Because of its spray-pattern which only goes up and doesn't drift to the sides, fire at a steady pace to control the recoil; this is especially useful when trying to land headshots. This, however, can be difficult, especially for newer players, so practice is recommended.

Use fast-firing weapons such as the XD .45 in a pistol round, or any assault rifle. They all have a magazine capacity that outnumbers the capacity of the GSR 1911 as well as a faster rate of fire. Don't get too close to the opponent, since it will give them a better chance of landing a headshot. 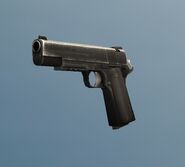 Pre-patch 0.6.3.5 model
Add a photo to this gallery
Retrieved from "https://criticalstrike.fandom.com/wiki/GSR_1911?oldid=6537"
Community content is available under CC-BY-SA unless otherwise noted.