The FP6 is a pump-action and the highest damaging shotgun featured in Critical Ops.

The FP6 is entirely capable of downing an enemy in a few shots, making it one of the deadliest weapons for close-quarters combat. The FP6 also has a high penetration factor for a shotgun, and combined with the high damage, the FP6 can easily down armoured players with Kevlar. The movement speed of the FP6 is also favourable, allowing the player to get to areas of the map suited for close-quarters combat quicker than with other weapons. The FP6 is also the cheapest primary weapon in the game, at only $1100, making it a very obtainable weapon.

The FP6 has extremely low range, being a shotgun, so trying to engage enemies at mid and long range will prove very ineffective, making the FP6 only useful for close-quarters combat. The FP6 also has an extremely slow rate of fire, being pump-action, making accurate shots essential, as pumping for the next shot will often result in death. The FP6's reload is also very slow, as cartridges are inserted individually. However, the FP-6 does massive damage at ranges under 10 yards, being able to one-shot kill armored players who have full health. For this reason, it can be a great asset in bomb defuse matches on close range maps when money is limited. It is notably deadly in the air vent and hallways of the Bureau map and the spawn rooms of the Brewery map, as well as tight spots on other maps, like the air vents in the Division map.

Overall, the FP6 is a very high-damage weapon, especially in close-quarters, with few to no weapons being able to compete with the FP6 at said range. However, it has an extremely slow rate of fire and limited range. 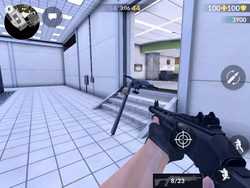 FP6 model prior to patch 0.6.3.5.
Add a photo to this gallery
Retrieved from "https://criticalstrike.fandom.com/wiki/FP6?oldid=6173"
Community content is available under CC-BY-SA unless otherwise noted.