Defuse is a gamemode in Critical Ops, where players are assigned to either eliminate their opposing team or plant/defuse the C4. This game mode is, as suggested by the game community, a "balanced gamemode" and as such, Defuse is used in favour of tournaments.

The main objective is to kill all enemy players (except for Counter-Terrorists if the bomb is planted) or complete these objectives.

During the initial match, players can only buy pistols and gear, since they only have $800. After 12 total rounds, players from each team are flipped to the other. Unlike Deathmatch, weapons have to be bought with money. 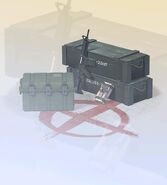 Defuse picture pre-0.9.6
Add a photo to this gallery
Retrieved from "https://criticalstrike.fandom.com/wiki/Defuse?oldid=6194"
Community content is available under CC-BY-SA unless otherwise noted.