Deathmatch is a gamemode in Critical Strike Portable and Critical Ops.

In Critical Strike Portable, the gamemode is almost identical to Team Deathmatch, but all other players are considered enemies.

In Critical Ops, players can respawn after dying, unlike Defuse and must contribute to add up their team's kills higher than the enemy team's.

In Deathmatch, players are assigned to kill any other player, even if the people are on the same side as the latter. Like Team Deathmatch, players can respawn if killed and can kill others endlessly, with no clear objective, one could be being at the top of the leaderboard.

This gamemode is unpopular, due to the constant spawning near opponents.

Like Critical Strike Portable, players are spawned in random areas across the map where they can infinitely kill other opponents and respawn within 5 seconds. Unlike CSP, it has a legitimate objective, to raise the team's kill count higher than the opponents in a limited amount of time to win.

Unlike Defuse mode, no gear besides Kevlar can be equipped at all and all weapons are free. Spawned players cannot be killed until after 3 seconds. 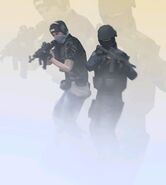 Deathmatch picture pre-0.9.6
Add a photo to this gallery

Retrieved from "https://criticalstrike.fandom.com/wiki/Deathmatch?oldid=5896"
Community content is available under CC-BY-SA unless otherwise noted.