Bureau is a map in Critical Ops, added in patch 0.5.2.2. The map is one of the most popular and iconic maps in the game, even being featured on the main menu screen.

Bureau was ranked as the community's most favorite map on Facebook and on Strawpoll as of July 20, 2017.

Bureau's three main passageways offer both close range and long-range combat. Some of its tight spaces can harbor more concentrations of combat, especially in rooms with large amounts of players. Bureau takes on the appearance of an office and a command center operated by the Counter-Terrorists. The various books and magazines in the map reference many features in the game, such as maps and skins.

There are three main passages in the map; the lounge room hallway, the middle hallway and the long passage connecting T spawn to the break room.

The passage connecting the break room to T spawn (B long) is the longest path in the map. As such, long-range weapons, especially sniper rifles are used in fights taking place in that area. If a terrorist, hiding behind the plants and shooting through them is a clever option, but you are more at risk if the opponent is using a sniper rifle. If a counter-terrorist, going to this location alone against other groups is not a safe option, since the T spawn location is nearer and offers more chances for terrorists to arrive first.

The middle hallway is the most compacted and shortest path in the map and is highly prone to ambushes from several sides. In here, use weapons with high fire rate and/or high damage, along with flash or smoke grenades if needed for assistance.

In the lounge room hallway connecting the office near CT spawn, bombsite A and the T spawn area, players can carry weapons of varying ranges. Staying a safe distance away while shooting enemies is recommended when facing large groups. Rush at your own risk.

For Terrorists, this area can be hard to reach, as Counter-Terrorists can attack from the office entrance on the left and the entrance to the bombsite itself. To add on, this is the farthest bombsite from T spawn.

If a terrorist holding the C4, it is recommended to have a teammate cover you while you plant the bomb. Covering yourself with a smoke grenade's emissions is also helpful.

The same smoke screen technique can also be used to defuse the bomb, although it is recommended that the Counter-Terrorist has supported since Terrorists will likely be camping near the bomb.

Because this area is easier to reach than bombsite A, expect higher concentrations of players. As such, be on your guard for sudden ambushes, especially when you have to defuse or guard a planted bomb.

More books located in the enclosed office areas at the passage to the B site. 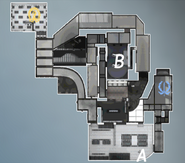 Critical Force Entertainment logo found on an object.
Add a photo to this gallery

Retrieved from "https://criticalstrike.fandom.com/wiki/Bureau?oldid=6595"
Community content is available under CC-BY-SA unless otherwise noted.